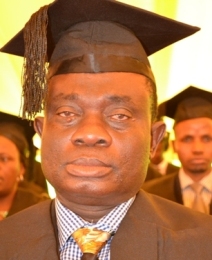 Prof. Abayomi Kizito FOLORUNSO, Professor of French Language and Linguistics is currently the Provost of the Humanities and Culture. Throughout the three years he spent at the University of Benin, Professor Folorunso enjoyed the Federal Government Merit Award and also attended the prestigious University of Ibadan for Master degree in French in 1985. He bagged his Ph.D in Lyon, France. He was an Associate Professor in 2008 and became a Professor in 2011.

At the French Village, he was the Head of the Academic Unit in 2001 before he later became the Head of Linguistics Department when various Departments were created in 2003.

Professor Folorunso has served in various capacities as a lecturer, administrator and researcher. He has to his credit over thirty journal articles published in both local and foreign journals of high repute and international recognition.