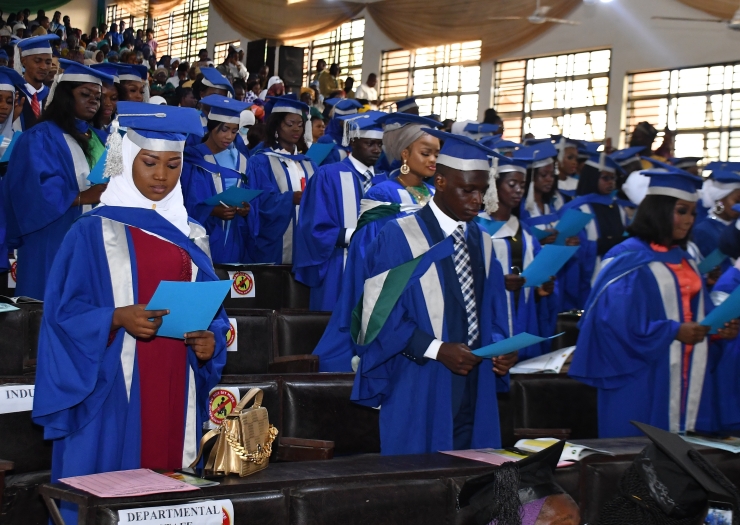 The Nursing and Midwifery Council of Nigeria (NMCN) has inducted forty (40) graduate nurses of Osun State University into the nursing community as Registered Nurses.

This was done at the University's 3rd induction ceremony of the Department of Nursing Science, held on Thursday, 4th August, 2022 at the College of Health Sciences' 750-seater Lecture Theatre.
The inductees, who consisted of two first class graduands, took the Nurse's oath, which was administered by the NMCN's Registrar and Secretary-General, Alhaji Umar Faruk Abubakar, represented by the Head of Department of Registration, Alhaji Aliyu Adamu.
In his address after administering the oath, the NMCN Registrar reminded the newly inducted Registered Nurses of the society's expectations from them as healthcare providers, and charged them to live up to the demands of the profession at all times. He also encouraged them to be willing to learn from senior colleagues during their internship, and urged them to acquire higher degrees in nursing after internship.
The hybrid induction ceremony had a thought-provoking lecture delivered by an expert in community health nursing from the Department of Nursing Science, Obafemi Awolowo University, Ile-Ife, Dr. Adekemi Olowokere, who enlightened the audience on the induction theme, titled "Brain Drain amongst Nurses in Nigeria: The trend, implications and way forward".
In her presentation, she surmised that there was a need for well researched and widely consulted policies that would focus on improving remuneration and good working conditions for nurses, which would curtail brain drain. She also suggested decentralization of administrative power in the health sector and the regulation of migration as ways to combat brain drain.
In his opening remarks, the Vice-Chancellor, Professor 'Ayo Clement Adebayo, congratulated the University’s staff for their commitment and dedication, as well as their understanding with Management all of which culminated in the production of another set of nursing graduates, who would go out and impact their community positively. He narrated his experience the previous month when he was in Abuja for some official engagement, stating "I was in Abuja last week together with the JAMB Registrar for a federal government meeting, and Osun State University was specifically repeatedly cited as a University that kept running on schedule. The Registrar of JAMB was so happy with UNIOSUN that he kept requesting other Universities to learn from us on how we have been sustaining our programmes and maintaining stable academic calendars. He was surprised that a state university could manage her programmes consistently without disruption over the last six years."
Earlier in his welcome remark, the Provost of the College of Health Sciences, Professor Christopher Alebiosu, admonished the inductees to religiously abide by the nursing oath and do all in their power to elevate the standard of the profession anywhere they found themselves.