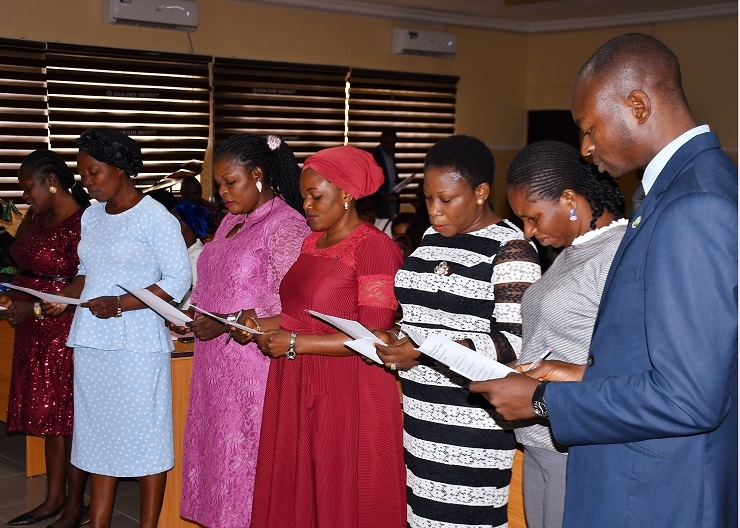 The secretaries of Osun State University have been charged by the Vice-Chancellor, Professor 'Ayo Clement Adebooye, to religiously adhere to the code of conduct guiding the secretarial profession and to jealously guard and not divulge confidential information of the institution and their principals.

The Vice-Chancellor made this entreaty at the University's Multipurpose Hall, while delivering his keynote address at the inauguration ceremony of the Osun State University chapter of the Association of Professional Secretarial Staff of Nigeria (APSSON), held on Thursday, 25th August, 2022.
Addressing the University secretaries present at the inauguration ceremony, the Vice-Chancellor also urged them to continuously improve themselves professionally to ensure effective and efficient discharge of their duties.
In his words "Confidentiality is another principle that must not be taken with levity in your profession. There are some documents that have to be kept secret to avoid disruption or imbalance in the system, and it is the duty of secretaries to be discreet with such documents."
"I must also add that professional secretaries must be up-to-date in their Information and Communication Technology skills. They must be able to use Microsoft Word, Excel, Power-point and other associated software excellently. They must maintain very high proficiency in written and spoken communication skills; and they must have very sound analytical and problem-solving skills," the Vice-Chancellor added.
The National President of APSSON, Mr. Nasiru Yaro, who was represented by the immediate past President, Alhaji Ganiyu Buhari, administered the oath of office on the executive members, and presented the staff of office, certificate of inauguration and association's code of conduct to the UNIOSUN branch President, Mr. Abayomi Farotimi. In his remark, the National President counseled the newly installed executives to maintain the culture of excellence associated with the association.
The UNIOSUN branch President in his closing remark thanked the Vice-Chancellor for consenting to install a branch of the association in the University, and on behalf of other executive members pledged his commitment to the association and the responsibilities they have been saddled with.
Goodwill messages were thereafter taken from the Provost of the College of Health Sciences, Professor Christopher Alebiosu, who was represented by Professor Olatunji Mabayoje; the College Secretary of the College of Health Sciences, Mrs. Abosede Atinuke; Mrs. Hussein Ede and Mr. Adiat Olalekan.
Other pioneer executive members of UNIOSUN's branch of the association include: