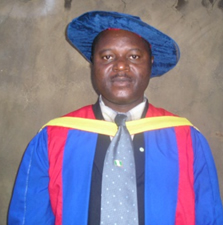 He made this statement while delivering the third inaugural lecture titled, ‘Exploring the Vegetables’ World: Nutraceutical and Physiological Investigations’, at the Main Campus of Osun State University. He said, ‘There are several vegetables which are eaten by only the poor rural dwellers which I often refer to as “food of our fathers” because most urban elites do not know them and possibly have never seen them before. This therefore calls for a re-orientation of the research mandate in our Universities and Research Institutes.’ He then recommended the establishment of a National Under-utilized Plants Research Institute (NUPRI) by the Federal Government of Nigeria.

According to him, ‘the new Institute should have its headquarters in Osun State with branches in East, South and Northern Nigeria, because out of about 30 national research institutes in Nigeria, none has its headquarters in Osun State.’ The proposed Institute is to focus on those indigenous under-utilized species on which no organized research had been conducted with the following mandates. The Institute will collect indigenous fruits, vegetables, spices and legumes of Nigeria and conserve them in seed banks and field gene banks. This way, the “food of our fathers” can be conserved for generations yet unborn. The Institute will also conduct research into sustainable production practices for the high premium indigenous species including seed production and plant health; engage in breeding and improvement of the indigenous fruits, vegetables, spices and legumes; provide information on food value of the different species as a guide for farmers and consumers; conduct research on their utilization and value and disseminate information and train farmers on all aspects of under-utilized plants production and utilization.

Professor Adebooye is an external examiner to University of Fort Hare, South Africa and has examined three PhD theses; he has served as permanent reviewer for highly reputable journals published by Elsevier, Springer, Taylor and Francis, Wiley, Blackwell, Acta series, Chinese journals, Japanese journals etc. He has edited three books that were published by the Cuvillier Publishers, Germany and has served as a project assessor for the Danish Agency of International Development (DANIDA), Denmark.

In the last 15 years, Professor Adebooye has won up to 12 competitive research grants from international organizations and while at the Obafemi Awolowo University, Ile-Ife, he successfully secured full funding from the German Humboldt Foundation for organizing two international Humboldt Conferences (2008 and 2009) that attracted scientists from about 13 countries, including European countries. He has attended international conferences in about 20 countries across the continents of this world. He is listed as a member of the Global Facilitation Unit of experts on under-utilized plants by the Bio-versity International, Rome.

On June 8, 2009, Professor Adebooye was decorated in Berlin, Germany by the Government of the Federal Republic of Germany as the German Humboldt Scientist Alumni Award winner at a ceremony attended by over 1000 eminent world scientists, including Nobel Laureates and Presidents of German Universities The award ceremony was unique because it was the first-ever to be granted and Professor Adebooye happened to be the first Nigerian to win this highly prestigious award.

To complement the huge investment of Osun State University in promoting digital science laboratory, Professor Adebooye in 2010, obtained a grant of N8.0 million from the Bundesministerium für Bildung und Forschung, Germany through the Humboldt Foundation and procured additional state-of-the-art laboratory equipment for the Universitry’s plant physiology laboratory at the Ejigbo Campus. Professor Clement Adebooye is now the Director of Research, Linkages and Partnership in Osun State University.