Professor Alebiosu C. Olutayo, the Provost of the College of Health Sciences at Osun State University has warned the general public to refrain from the consumption of medications without prescriptions. Professor Alebiosu gave this warning while delivering the seventh Inaugural Lecture of the institution titled: ‘Emerging Epidemic of Non-Communicable Diseases – Conspiracy against the kidney’.

According to him: ‘There are many identified factors causing chronic kidney disease, however the prevalence of these factors differ to varying extent in different parts of the world. In Nigeria, some socio-cultural practices can lead directly or indirectly to the development of chronic kidney disease. These include long-term ingestion of herbal concoctions/preparations, chronic analgesic abuse (certain pain killers) and the use of certain soaps/creams/lotions used as bleaching agents. Nigerians should refrain from consumption of medications without prescriptions’. 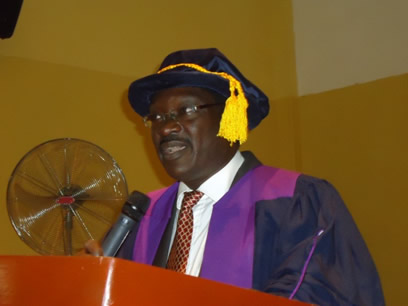 He then listed other bad socio-cultural habits associated with kidney disease to include ‘the chronic exposure to heavy metals (such as lead found in paints and mercury in soaps etc), and obesity – which is regarded as ‘a sign of good living’ in Africa men and women’.
To reduce the impact of Non-Communicable Diseases (NCDs) on individuals and society, the don recommended that all sectors, including health, finance, foreign affairs, education, agriculture, planning and others, should work together to reduce the risks as well as promote the interventions to prevent and control them.

The inaugural lecture had in attendance several eminent personalities from all walks of life including traditional rulers, academics and medical students from several other universities. The Principal Officers, Senate members and other staff of the University also attended.