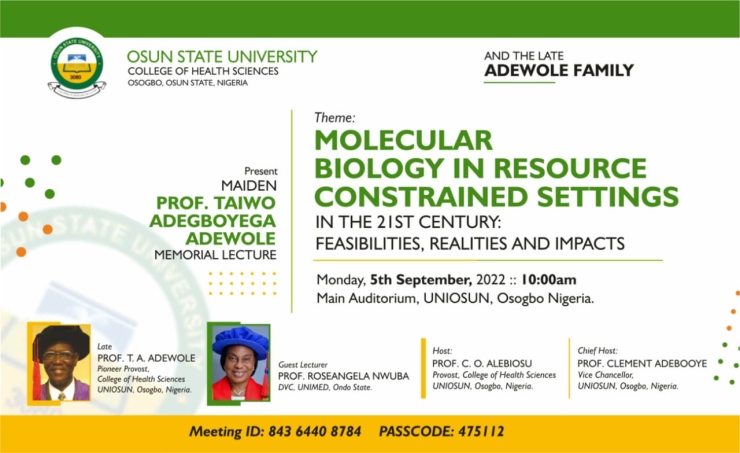 The UNIOSUN College of Health Sciences, under the leadership of the Provost, Professor Christopher Alebiosu, will on Monday, 5th of September hold the maiden memorial lecture of the College's pioneer Provost, Late Professor Taiwo Adegboyega Adewole at the University's main auditorium in Osogbo.

The memorial lecture themed "Molecular Biology Resource-Constrained Settings in the 21st Century: Feasibilities, Realities and Impacts", will be delivered by a Professor of Cellular and Molecular Parasitology and Deputy Vice-Chancellor of the University of Medical Sciences, Ondo State, Professor Roseangela Nwuba.

Seasoned academicians, clinical experts, medical researchers, leaders of educational institutions, families of the Late professor, students, and other members of the public will seize the golden opportunity to "interrogate" the lecture topic and honour the blessed memory of the Late Prof. Adewole at the forum.

In his lifetime, the Late Taiwo Adegboyega Adewole was a Professor of Chemical Pathology. At various times and in diverse institutions served as the Head of Department, Dean and Provost. He was the foundation Provost of the College of Health Sciences in UNIOSUN. His love for laboratory medicine was unparalleled and he was instrumental in the setting up of a research laboratory in the College.

The late Adewole was born in 1949 and went to be with the Lord in 2019 at the age of 70 years. He is survived by his sons and the Matriarch of the T.A Adewole family, Mrs Morohunkeji Adewole.